I was recently exposed to an influential article by Gerd Theissen* pertaining to the interpretation of the Bible in light of sociological analysis of the situations the text presents. Namely, Theissen sets out to explain the cultural significance of meat in the city of Corinth at the time of Paul’s letters to them, an attempt to better understand the controversy taking place in 1 Corinthians 8-9.

This article about the quarrel between the “strong” and the “weak” in Corinth reveals the customs, cultural traditions, and economic realities that shaped the variations in perceptions of eating meat for the 1st century Christians. Theissen is able to show that the richer people ate meat often, were accustom to consuming it, and were uninvolved in its purchase (which could quite possibly come from a sacrifice to idols). The poor, on the other hand, experience meat far less frequently, and consumed it primarily in pagan festivals and feasts in the city, the object of which was idol worship. This, amongst social factors such as sociability, legitimation, and communication in the upper class, reveals the tension to which Paul speaks in 1 Cor 8-9.

The fascinating and moving thing about Paul’s response is the way that it deals with these societal norms. Theissen reminds us that “for Paul the revaluation of all norms of social rank and dominance – including the dominance of a higher “knowledge” and “wisdom” – proceeds directly from the preaching of the cross (1:18ff).”* The compromise which Paul lays out leaves room for differing social classes to partake in meat in their different ways. The privileges and participation of the social classes is preserved. However, one thing is clear: The concern, care, and respect of other believers is to so permeate the norms of the Christian community that they would give up their rights or privileges if it meant preventing a brother or sister from stumbling. 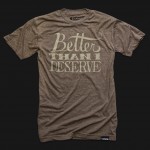 Though the situation to which Paul speaks is quite specific, the principle is seemingly clear. When it comes to rights and privileges, I cannot help but be overwhelmed with the connection to my own culture and society. Our world of rugged individualism, self entitlement, and inalienable rights certainly leaves a wake in our own worldview. We speak about what we “deserve” and what we have a “right” to in such a way that it takes only a little reflection to see the selfishness it masks. We, too, so easily fall victim to the logic of what we deserve – the defense of our own rights. But as Christians, what rights should we be claiming? To what should we be most strongly entitled?

Paul’s preaching emerged from the cross. If, as followers of Christ, we are going to be enthusiastic about claiming any rights, stubborn about any one thing we deserve, ardent about being denied something particular, I pray that these would emerge from the cross.

Above all other rights, above any other claim, before we dare make observation about what we do or do not deserve, may we begin with the rights afforded to us by the cross.

May I claim no right but to sacrifice, to give, to be poured out on the behalf of others.

To be rid of self-interest, less concerned with what I rightfully own than what I freely give.

I have a right to be taken advantage of, to be slighted, to be misunderstood and falsely accused.

These are the rights I find at the foot of the cross.

To be broken, dejected, and wholly dependent on the Father.

To care as much about those suffering on my left and on my right as I do about my own plight.

To lovingly embrace the poor, unclean, and shamed.

To endure shame and stigma on behalf of the kingdom of God.

To be most interested in the welfare of all of creation over and above my own comfort and convenience.

To be less about self-promotion and more about promoting the will of the Father.

If I claim any right, it is the right to give mine up.