Brokenness is but His stage 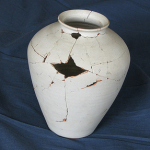 A friend of mine, in an unexpected moment of candidness, commented to me about the reality that there is some level of pressure to appear as though he has things together. Society, American culture, even the church, does seem to emit some notion of perfection, strength, or together-ness. After all, to admit to doubt, fear, struggles, frustration, or fatigue is simply to admit to some level of weakness. To appear as unblemished as possible seems to be the goal, and thus, brokenness is defeat.

These thoughts that led me to a brief, but powerful, reflection on one simple fact. Brokenness is precisely what God works with. Brokenness is where He works. Somehow, in some unexplainable way, it is in brokenness that the Lord operates.

Amidst a fallen creation, He sets about a restoration. Even as the world experiences sin and creation appears marred, He begins making things new.

He aligns himself with imperfect people, attaches His name to a troubled nation through generations of wavering faithfulness, and heralds his message through the unlikeliest of vessels. There are those who abandon Him, some who doubt God’s ability to work beyond their capabilities, and countless others who live an existence of unabashed idolatry. He does not abandon tarnished work, but utilizes the created to recreate.

Incarnate, He is found beside the marginalized of society. A king in his own right, He appears in no way of kingly manner. Triumph is seen most prevalently in an empty, yet humble, tomb. The battlefield was a hill and the weapon of choice, crossed timbers. Born to an unwed mother and a common wood worker, He comes to a crippled existence and sees reconcilable creation. Into a broken world he comes to carry forth the process of recreation – the restoration of the world to its intended wholeness. And present with us is a Spirit, dwelling inside of us to recreate our hearts. Here, in our brokenness, is where He works.

And still today, He utilizes a church, a community of broken people, and now a church history that is far from worthy. Following Christ, believers have been going astray routinely. Yet, here in our brokenness He finds His partner for the display of His glory, for setting forth reconciliation in the world.

And so, brokenness stands here – in me, in the church, in our world.

Somehow, in some unexplainable way, the messiness, suffering, and brokenness become the stage on which the glory of Jesus Christ is on full display. This brokenness becomes the arena in which God can most unavoidably be proclaimed as God. The shattered reality of our meager humanity becomes but a glimpse of the power of God to restore.