Blind Equality: Race, Gender, and the Church’s next step

The beauty of days in which we recognize icon’s like Martin Luther King, Jr. and the movement he represents is that it offers us the perspective of just how far we’ve come, and it is a solemn reminder of where we once were.

I have recently observed a number of scenarios that have caused me to question what Christian equality truly looks like and what our collective next step must be.  What better setting to offer these reflections than the holiday dedicated to a man who championed the “content of character” as a person’s value rather than the color of their skin.  This was truly a man who envisioned a community in which “all flesh” see things together.  I thank God that I have grown up in a world that stepped beyond the tragedies of segregation and mass, racial injustice.  My lifetime has not known appearance as a perquisite.  My classrooms, locker rooms, universities, teams, and social settings have always been painted with a beautiful spectrum of diversity, worlds apart from where America could be found on the eve of King’s 1963 “I Have a Dream” speech.

As a student of theology, culture, Bible, and the like, I have been fortunate to find myself in places which value diversity.  In this field, leading scholarship has long since recognized the value of varied perspectives, spanning geographical, ethnic, and cultural bounds.  Similarly, learning environments are diversified and multiple views considered.  But even in this setting, I have all too often seen situations arise in which the African-American student is expected to offer insight to the perspective of the Black church, or an Asian, Indian student is expected to speak intelligently about how Asian believers might perceive something – as if all African-Americans even attend a Black church or one Asian could speak for a collective billion.  Our underlying assumptions are so often misguided, and the temptation to generalize is all to prevalent.

This is not racism or even ethnocentrism.  But I don’t think we can pretend it is true equality either.  You see, we may embrace diversity, and we can even admonish ethnic/gender discrimination.  But is it possible that neither of those has yet gotten to the heart of the problem?

Ronald A. Heifetz, in his work on leadership, characterizes two different types of problems.  Technical problems are those which procedure and top-down management can successfully address or correct.  These are, in large part, problems for which people already have the answers. Adaptive challenges, he says, require a much more difficult and bottom-up approach.  “Without learning new ways – changing attitudes, values, and behaviors – people cannot make the adaptive leap necessary… The sustainability of change depends on the people who have the problem internalizing the change itself.”* 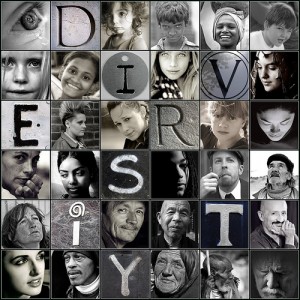 Contrary to this concept, I see tokenism occur all to often.  The generations I live amidst have dealt with segregation.  Discrimination has been reprimanded.  Yet, often times it is easier to keep board rooms, political leadership, and media outlets diverse (a technical solution) rather than address the adaptive challenge.  This is why I continually hear people throw out broad generalizations about Arabs, Muslims, or and any number of groups.  This is why we feed stereotypes of certain occupations, regions, or socioeconomic statuses.  I don’t think that our culture is dominated with discrimination, but I do think that the next step must move beyond our technical fix and address the heart.  True equality demands a certain blindness to a person’s demographics, the ability to see without preconceptions and to speak without assumption.

Might I suggest that equality in the church can be found in a similar plight? We have made great strides toward multi-cultural expressions of faith, and the overt acceptance of all people in places of worship is, thankfully, commonplace.   But have we addressed the adaptive need or simply made technical changes? “Anyone is welcome,” many churches say.  Yet, are you really prepared to let anyone who might walk in that door have a seat at the table, regardless of race, gender, or social status?

Though some espouse a firm stance otherwise, many congregations across the world have recognized the need for gender equality.  This is not an occasion to discuss it at length, but suffice it so say that many churches have made a positive move toward women in leadership in the church.  Both genders preach, teach, and administer the sacraments equally. Yet, rather than seek to acknowledge and embody the adaptive challenge, we often just make the technical one.

In all places where men lead, we’ll add women too.  Often, an equal distribution is even sought out.  I ask, is that really equality?   This seems like a top-down fix to me.  The necessity to place women alongside men in areas of leadership only points out the inherent problem.  We’re still looking at dividing lines!  Can not every ethnicity, gender, and age be seen by one another as believers, over and above any other characteristic?  Wouldn’t that provide real gender equality, as opposed to a forced front? This is precisely why a female preacher remains exactly that – the “female preacher.”  Together, we ought to see fellow Christians, united together in Christ and empowered together by the Holy Spirit.

True equality demands a certain blindness, the ability to see the character of a person rather than the characteristics of a body.

I often wonder what the Christian perspective ought to be.  What would it look like for us to realize that “There is neither Jew nor Gentile, neither slave nor free, nor is there male and female, for you are all one in Christ Jesus?” (Gal. 3:28)  Surely we have missed it when we fail to see men and women of all ethnicities and nationalities as equal participants in the body of Christ, and thus, as brothers and sisters.  Should we not seek to see one another as fellow-believers? Not the woman. Not the Hispanic guy. Not the old, white man. The unique, God-designed person.

Allowing the gospel to fully transform our outlook means placing value on the individual personhood of all people (And not just Christians).  Until we begin to see with eyes that acknowledge Sarah, Fatimah, Omar, and John as individuals who bring their own unique and valuable perspective to our world we fail to embody equality in our relationships.  Equality must arise from within our hearts, not with a quota-fix from above.  It must begin with a certain blindness by us all.

Strangely enough,  in the next step toward equality, in the dream that all flesh see together, we may find ourselves praying for more blindness.