May peace be upon you 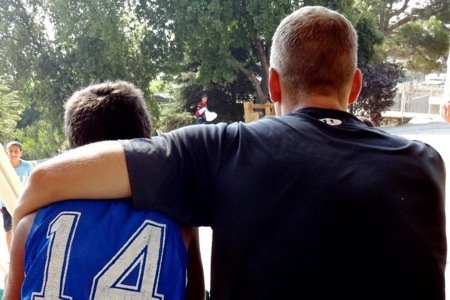 Ashraf was just a name a few weeks ago. We had several pairs of shoes that had been purchased for boys but were in need of a sponsor, someone to write a letter to go with them and a picture to write back to. The name on the plastic bag that I was to write a letter to didn’t mean much. In fact, upon arriving I had forgotten what name was with the shoes I had brought!

He wasn’t the first boy, or second, or third, who demanded my attention. You could even say he is one of the quieter ones. It took me a few days to really get to know him. He was more than amused with the Arabic greetings I was able to conjure up, and for several days our primary interaction was him running to find me so that he could say “Salaam alaykum” (a greeting meaning ‘peace be upon you’), to which he eagerly awaited my response of “Wa-alaykum salaam” (May peace be upon you). This was followed by his own unique giggle, every time.

I have my suspicions that this was a result of a poor pronunciation, but he assured me it was just because he liked that it was coming from me. Before long, our daily greetings grew to much more. He was thrilled to get a letter from me with his shoes. From dancing to goofy vbs songs, sitting together in Bible stories, sharing with each other about our families, playing soccer, throwing water balloons… The list is long. The name of the boy whose shoes travelled in my bag half way around the world is so much more than a name to me now. I’ll be leaving soon, but his smile and story will not soon leave me.

This is only one small example, of which I could share 25 similar. Each one with a name and a story that has been impacted by a group of people who came to share life with them for two weeks, and from whom a team of foreigners has received so much.

“May peace be upon you.”. I’ve said it to him countless times this week. If only he knew how much I meant it. If only he knew how deeply we each long to see the peace of God change his future and his world. Here, it is akin to saying ‘hello’ or ‘good day,’ but it is my most sincere and honest prayer for these lives. Their home lives are all different. Some are difficult, others deplorable. Here at Dar El Awlad they receive great love and care. Their ethnic and geographic origins are all different. Some come from unstable nationalities, some tumultuous, others from no citizenship at all. Peace. I pray for peace in their lives in every way imaginable. I hope to see them again, though I don’t know if or when, but “Salaam Alaykum” will be my most heartfelt words and honest prayer as I leave this place.

God, may your peace be upon these boys.